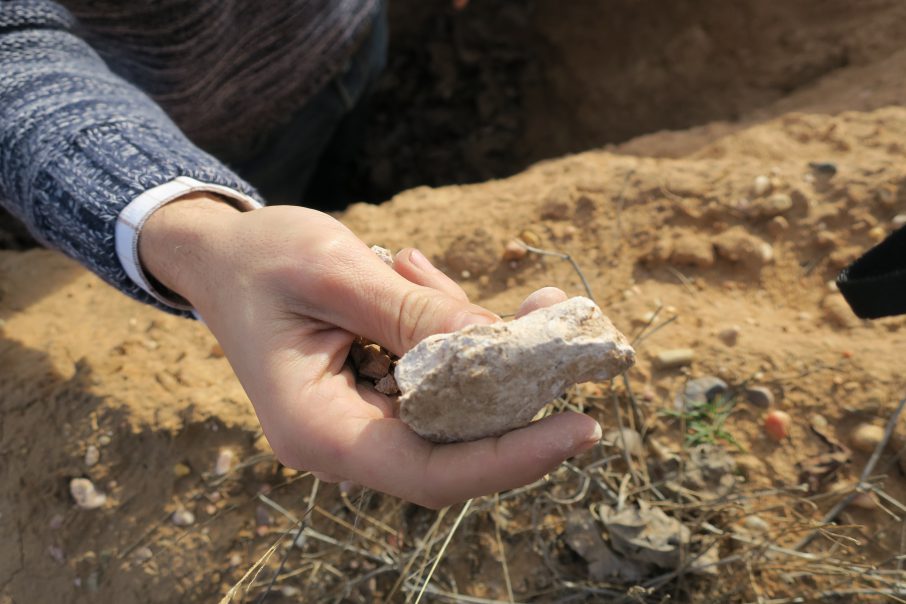 Jorge with a piece of the limestone bedrock that his vines dig into. It is this white stone that adds longevity and structure to the wines of La Aguilera. 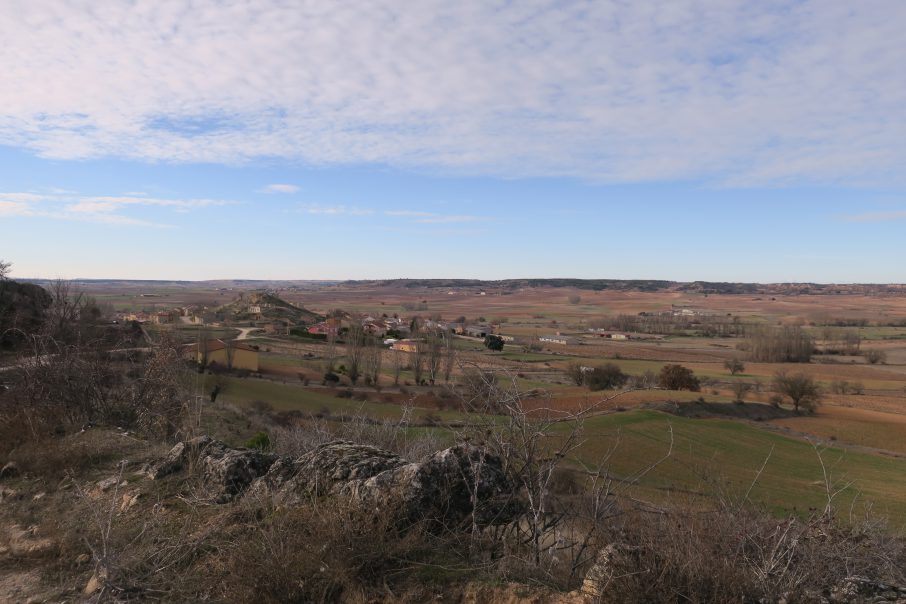 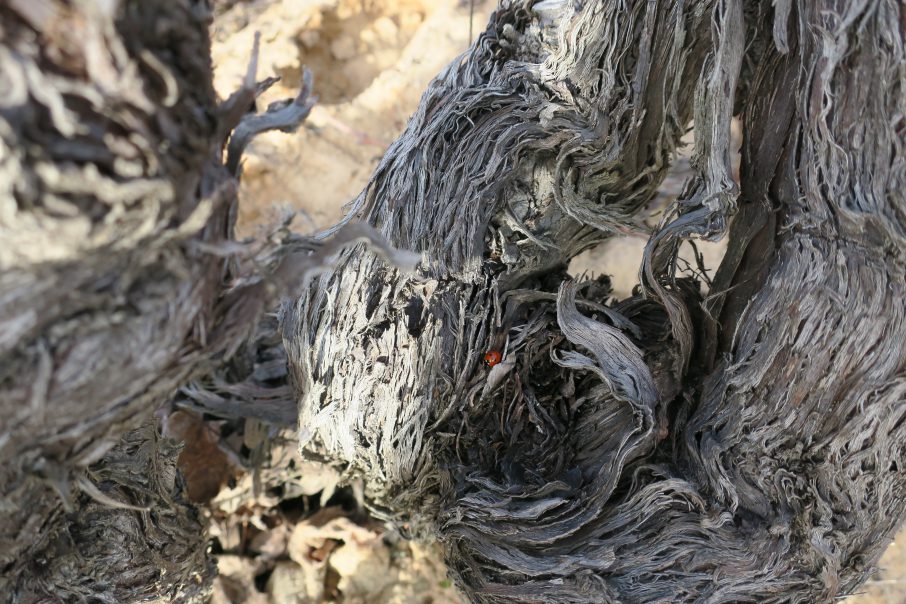 A lady bug making the most of the healthy, biodynamically farmed vineyards. 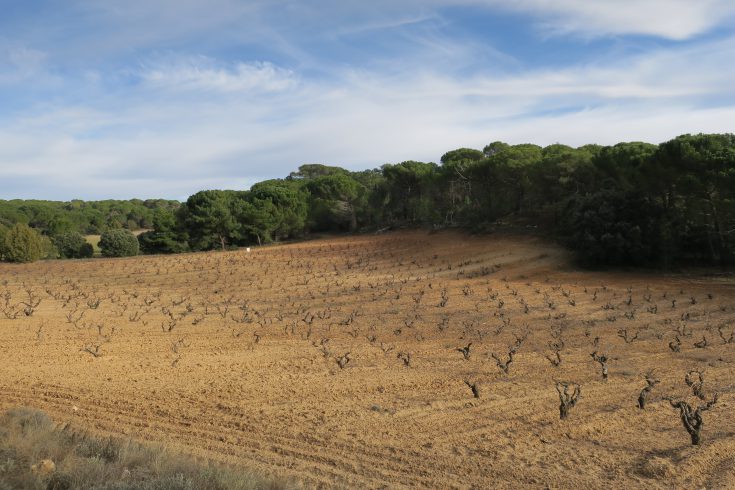 Dominio del Águila produce some of the finest, most complex and elegant Tinto Fino we’ve come across. Right now they’re only known by a few people in the wine world who have their ears to the ground, but that won’t be the case for long. Jorge and Isabel, husband and wife and business partners, have shot to the top of the peaking order in a couple of years and they are just getting started. What’s in barrel now is even better than whats been bottled, and what’s been bottled is already some of the best we’ve ever seen.

It’s difficult to find something to write about Dominio del Águila that hasn’t already been written before by someone with better qualifications than me. Peter Sisseck of Dominio de Pingus called it the most exciting new project in Ribera del Duero. Luis Gutierrez refers to them as having leapt straight to the top of the quality hierarchy in just a couple of years. In the last Wine Advocate roundup for Ribera two of the Dominio del Águila wines were in the top five for the region. The other three of the top five all retail for more than a $1000.00 AUD. Although all the kudos is great for the young husband and wife team behind Dominio del Águila, what’s more important is what they are actually doing. Big scores and big praise is not a new thing in Ribera del Duero, but the approach and skill they bring to the region is a true rarity. Dominio del Águila was founded in 2010 by Ribera del Duero natives Jorge Monzon and Isabel Rodero. Prior to 2010 Jorge had spent his formative years under Albert de Villaine at Domaine de la Romanee Conti in Burgundy before moving back to Ribera to work with Vega Sicilia and then Aalto. An obsessive focus on viticulture as the route to the expression of terroir underpins everything that happens at Dominio del Águila and is a clear reflection of the time Jorge spent at DRC. But there’s an intelligence at work here that is more than just mimicking the greats, Jorge’s adaptation of biodynamics being a case in point, rather than apply the exact methods learnt from Albert in Burgundy, Jorge has reworked each step to suit the specific challenges of the Ribera climate. It is this considered, thoughtful and deliberate farming that results in wines that are simply fantastic.

Dominio del Águila currently farm 30 hectares but only 10 of those are earmarked for the Dominio del Águila wines. The remainder make their way into some of the region’s most iconic wines – Flor de Pingus and Vega Sicilia among them. All of Jorge’s vineyards are old vines, many pre-phylloxera, clustered around the hamlet of La Aguilera. Whilst the local Tinto Fino dominates, all of these old vineyards are dotted with other varietals that add complexity and vibrancy to the wines. Bobal,  Albillo, Carinyena, Tempranillo Gris are all embraced as integral parts of the Ribera landscape. The town’s name; La Aguilera translates as ‘Eagles Nest,’ it’s a town that’s perched on top of a steep hill overlooking the Ribera del Duero plain, the top soil here is thin, meaning the old vines reach straight down into the limestone bedrock. This combination of soil, altitude, old vines and meticulous farming results in wines that are incredibly powerful, intense and firmly structured. They are  built for long, long, lives.

La Aguilera in the Ribera del Duero DO

Ribera del Duero is one of Spain’s great commercial and critical wine success stories. Though it doesn’t have quite the history and recognition of Rioja, it’s well established as the country’s second most important Continental region.

Wine grown here tends to be more extreme than in Rioja. With higher altitudes, fiercely hot summers and savagely cold winters, the local Tempranillo clones – Tinto Fino or Tinto del Pais – develop thicker skins and have naturally higher acid. It can be a heady combination: rich blackberry and currant fruit flavours and naturally smokey, dark, powerful grapes, with freshness coming from the altitude and temperature fluctuations.

Ribera can undoubtedly produce some of Spain’s finest wines, however it could also serve as a cautionary tale to ambitious appellations. The region burst onto the international scene in the late 80s and early 90s, thanks largely to the wines of Alejandro Fernández of Pesquera. The region went from sleepy agricultural country to a hotbed of investment speculation.

Given the mind-blogging prices demanded for Ribera’s more famous wines, this isn’t surprising. It’s led, however, to a proliferation of wines aimed at the U.S. market, so called ‘Parker Pointers’ after the famous critic who’s purported preference for larger wines has convinced many in the region that success means big oak, big extraction and big alcohol.

The best wines here have an effortless bulk and rich delicacy. They’re rare, but they can be incredible.