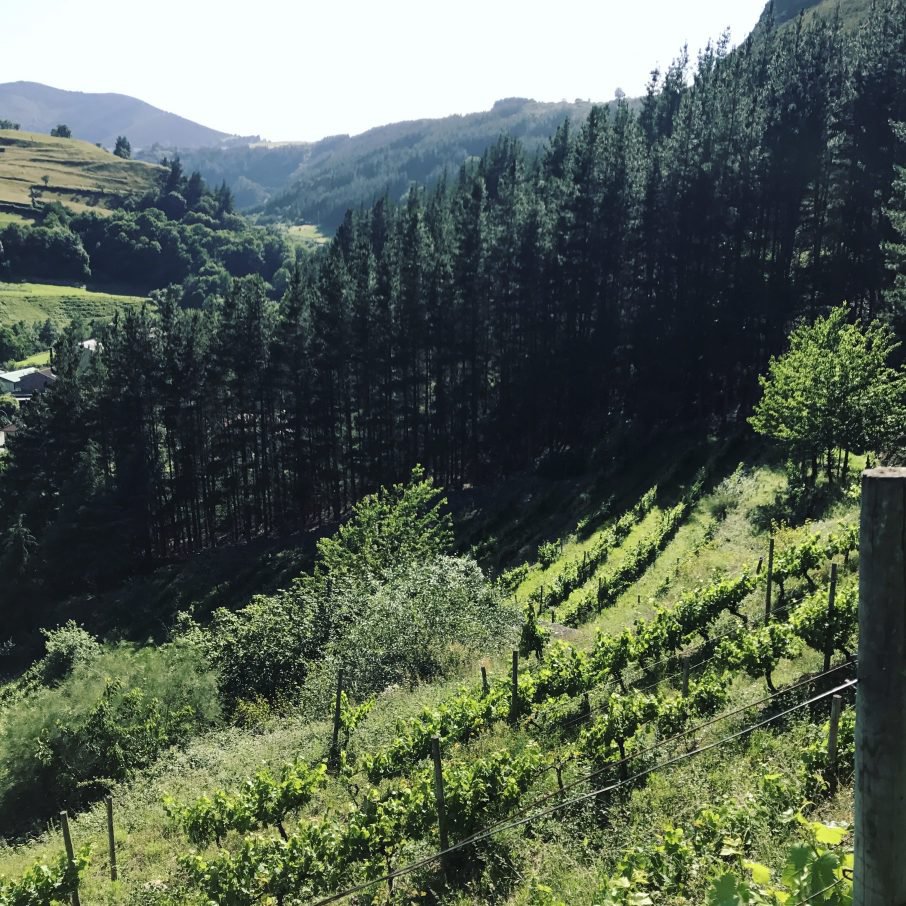 The Cadario vineyard further down river from Cangas del Narcea proper, in the small hamlet of Tebongo. 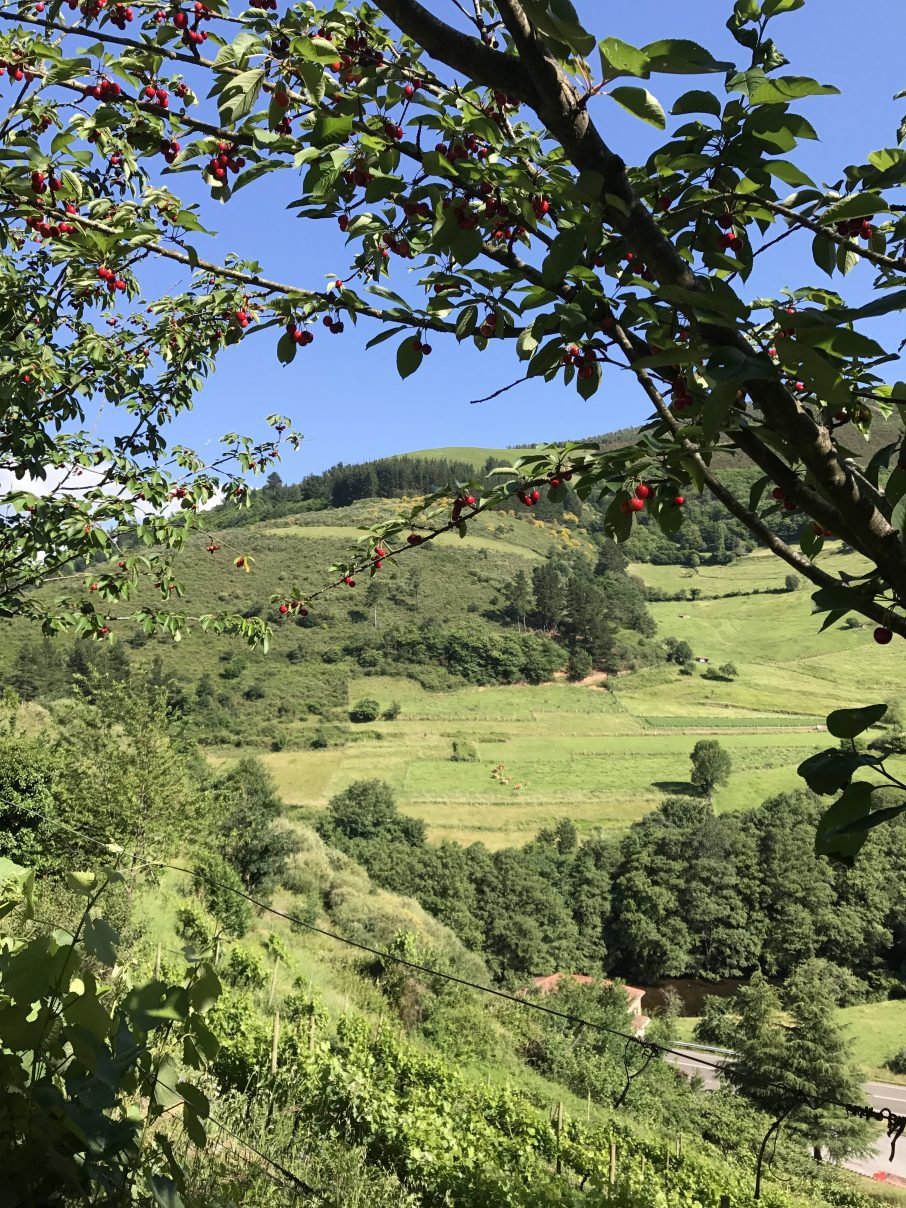 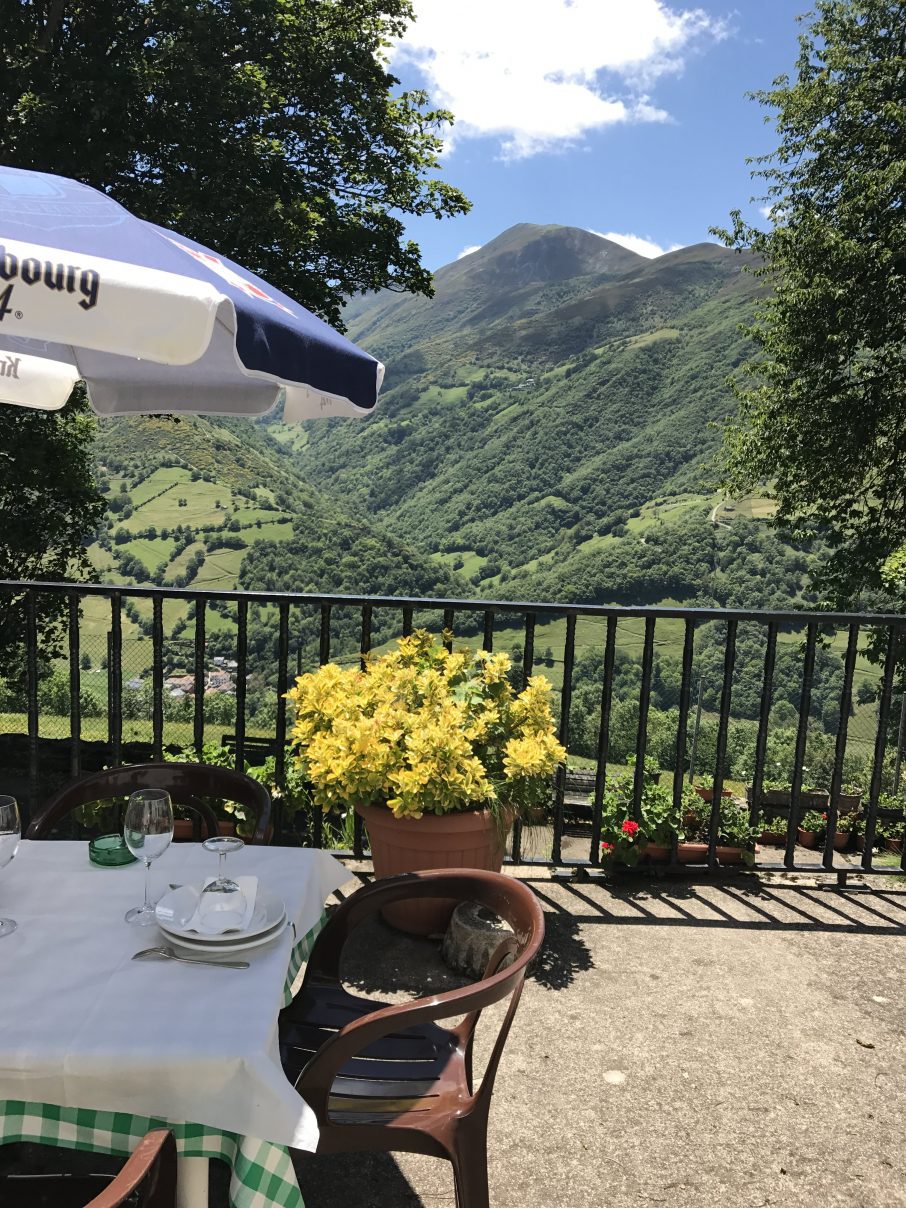 The view back over the Narcea River valley from the balcony of the BEST Fabada restaurant in Asturias.

Cangas del Narcea feels like a forgotten corner of North West Spain, cut off by large mountain ranges from Bierzo to the South and Galicia to the West. It’s most commonly accessed by driving along a twisting, narrow road that runs alongside the Narcea River for several hours from Gijon. The town lies in a valley with a sparse smattering of terraced vineyards rising up along the steep slopes from the valley floor. Soil types here are predominantly slate but patches of anthracite and quartz pop up intermittently. Benedictine monks began growing grapes here in the grounds of the local monastery more than a thousand years ago and the region is now home to a unique and eclectic mixture of varietals like Carrasquin, Albarin Tinto and Verdejo Negro which have evolved here in remarkable isolation over the centuries.

Despite the long viticultural history of Cangas when I first visited the town a couple of wineries were in operation. The first few tastings with conventionally farmed, technically correct modern style wines were largely uninspiring, despite the promise of the towns incredible looking vineyards. And then we stumbled upon Dominio del Urogallo. Urogallo is the work of Nicholas Marcos, a native of Toro, whose family has been making wine on the family estate for four generations. Nicholas left Toro with a desire to work in cooler climates with more potential for elegance and ended up working with Alain Graillot in the Northern Rhone. After several vintages with Graillot, Nicholas, took something of an unexpected gamble and moved to Cangas. Despite the lack of quality wine being produced here, the ‘heroic’’ nature of the vineyards, the uniqueness of the varieties and the incredible, old, terraced, slate vineyard ‘La Zorrina’ were enough to convince him to leave the viticultural safety of Crozes-Hermitage behind and strike out on his own in an obscure backwater of Asturias.
Nicholas now farms a total of 14 parcels around Cangas, totaling 7.4 hectares of vines, some of which are now 130 years old. All of the parcels are treated with the same meticulous care; organic viticulture, biodynamics and an intense focus on soil health. Each parcel is then vinified separately following the same sort of winemaking practices that characterized Domaine Graillot, lots of whole-bunches, indigenous yeasts, no fining, filtering or clarification. No additions are made to the wines at any point. The wines produced here are unusual on many levels; rare varietals, unique terroir, a wine maker committed to a natural wine philosophy and a largely unknown region, they show the freshness and vibrancy of cool Atlantic climates, but first and foremost they are marvelously delicious.

One of the most remote and beautiful corners of Spain...

Cangas is a small town in the edge of the mountains that cut Asturias off from the Continental Spain to the south. The mountains are mostly protected forest – although there is an tiny ski resort up there. It’s an area so wild that it’s still home to one of the last surviving populations of wild bears in Spain as well as a fairly large collection of wolves. The tourists who do come here are generally here for the wilderness – fly fishing for trout, amazing hiking and mountaineering. Dotted among this stunningly beautiful, dramatic countryside are old terraces planted on the steep slopes of the valley. It’s an incredibly tough terrain to farm – most of the vineyards are only accessible by tight, winding, steep roads. The vineyards are so steep that everything must be done manually, by hand, and the proximity to the Atlantic ocean, some 50km due north means there’s high rainfall, which brings disease pressure. If you can cope with all these challenges the results can be spectacular – whites with texture and complexity but unpinned by the driving Atlantic acid, reds that waiver in style between a serious Morgon cru of Beaujalious and the dark edged Northern Rhone.